The swift boats of the Vietnam War revolutionized river warfare, but do you know how these water vessels got their start?

Before Fred Sewart came along and founded Sewart Seacraft in 1942, most water vessels were constructed of wood and steel. Swift boats, however, are welded together with aluminum.

The U.S. Navy and Government found that this model of aluminum boat could run quickly, were lighter than previous models, and could navigate shallow water, perfect for what the river warfare soldiers were coming up against in Vietnam.

The company was acquired by a Fortune 500 company in 1967, causing many who didn’t want to work for a corporation to jump ship. Some of these engineers and managers grouped together and founded Swiftships, the modern-day makers of the swift boat, in 1969.

When the Vietnam conflict began to wind down in the mid-70s, Swiftships expanded to supporting oil fields; the late 70s saw the company establish six shipyards and employ over 2,000 people.

The collapse of oil fields in the 80s marked the company’s diversification into foreign military governments with hundreds of partners that are still with them today. Supporting these foreign efforts is a strong employee base that Jeff Leleux, President, said is made up of the “best blue collar workers anywhere”.

“Our workers take great pride in their jobs. We’ve never said no. There has never been a program or project anywhere that has scared us off. We’ve always found a way to put our products in every region that’s been interested in us, no matter what they were asking for.”

A mainstay at the company over the last 40-plus years has been Calvin Leleux, now Chairman. He started with Sewart Seacraft, went on to become a junior engineer at Swiftships, and worked his way up to be an owner.

“He’s been involved in almost every design from hull number one,” shared Jeff Leleux. “He’s not a computer-savvy guy, but the laws of hydrodynamics haven’t changed in thousands of years, and no one knows them better.”

“My whole life and passion has been building boats,” Calvin Leleux shared with us. “This company hasn’t been afraid to take risks, which has been a perfect fit for me. We’ve been willing to drive our flag into a lot of different countries around the world. Even today, many companies don’t work beyond their home country. In this niche, we are the only guys that are taking these big risks.”

Now with an impressive footprint in over 50 countries, nearly 90 percent of Swiftships business comes from these foreign military contracts. From Egypt to Dominican Republic, to Iraq, Swiftships has maintained incredible relationships with governments all over the world.

“We haven’t even scratched the surface yet,” Shehraze Shah, CEO, shared. “We’re considered one of the best OEMs in the world because of the quality we offer, and our foreign military sales program appeals to quite a few buyers.

“Swiftships also does something no other shipyard in the world does: maintain an entire fleet for a foreign military. Iraq’s entire fleet of navy vessels is in our hands. We maintain its ships small and large, and have a ship repair facility to handle the maintenance.”

Although the U.S. market doesn’t make up much of its business now, it still supports Swiftships rich history.

“We’re patriots, we love the U.S.,” said Jeff Leleux. “We’d dearly love to provide equipment just to the U.S., but the global economy is too ripe for the picking. The U.S. Navy has always had a need for something unique, and our relationships with the armed services have strengthened over the last 40-plus years.”

But Swiftships’ relationships with governments at home and abroad aren’t the only ones of note: the company also has strong partnerships with the likes of Lockheed Martin, Northrop Grumman, and even Rolls Royce.

“If Lockheed believes in you, you’ve got a ticket for success,” said Shah. “Our relationship with them has added credibility and opened doors that wouldn’t have been possible before. Without them, we wouldn’t be able to sell our combat systems to a smaller market.”

There’s no question what drives the success of Swiftships.

“It’s people,” Geibel said. “They are the heart and soul of the organization. Their dedication, drive, and innovative ideas really showcase what Swiftships is all about.”

“I’ve fallen in love with our product and our people,” Shah concurred. “The culture is unlike anything I’ve ever seen. We’re truly a company built by honest, hardworking people who care about what they do.”

Swiftships’ Anaconda is a Special Operation Craft Riverine (SOCR). It’s a diesel powered, all-aluminum water vessel with twin water jet propulsions. It is designed to operate in both salt and fresh water, making it the ideal choice for militaries around the world.

Eric Geibel, VP of Operations, was the man in charge of leading the Anaconda program. Swiftships partnered with its university affiliates and its entire vendor base to find out what types of tech and equipment would work best for an autonomous river assault craft. They weren’t disappointed.

Through strategic partnerships, the company identified engine packages, water jets, and key electronic capabilities, among other technologies to support the project.

On the current iteration, Swiftships was keen to focus on the dynamics of running an autonomous vessel in a river, such as the currents and wave action. This first phase of design was figuring out how to control the water vessel remotely.

“The challenges revolved around finding the right combinations of technology that would give us the information needed to safely operate the craft,” he said. “Now that we have a prototype vessel we can control remotely we’re moving to the next level.”

Now Swiftships is focusing its attention on how artificial intelligence can take over mundane human tasks. The company’s IT/tech department is working on software solutions to implement AI on the vessel.

“The idea behind autonomous functionality it to create a versatile asset, reducing human error, and removing personnel from harm’s way.”

Swiftships’ 75m Swift Corvette was designed to meet the needs of any environment and overcome any challenges of conventional and asymmetric warfare. The all-welded aluminum or steel vessel can reach a maximum speed of 30 knots and has the endurance to be out to sea for up to 25 days.

This proven hull and platform-based control package can provide the intelligence and reconnaissance to out-class the weapons and strategy of threats in many domains of maritime warfare.

The vessel, which can house up to 60 officers and enlisted, also contains stealth features, anti-air and anti-surface missiles, medium and small caliber accurate guns with high rate of fire and has the capability of carrying a multirole helicopter and/or UAV.

Customers can customize their order in accordance with operational requirements and government’s regulations. 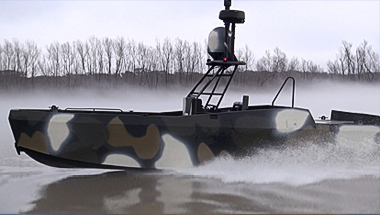 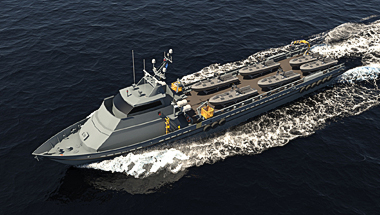 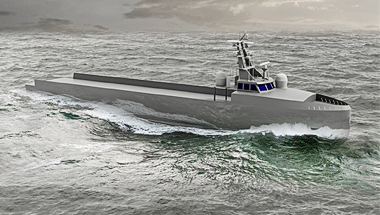