All contracts are managed by US Naval Sea Systems Command in Washington, DC, on behalf of their Foreign Military Sale clients in Iraq. The contractor is small business qualifier Swiftships Shipbuilders, LLC in Morgan City, LA.

A maximum $18 million contract to provide Iraq with provide technical expertise in preventative and planned maintenance, emergent repairs, and platform overhaul support services for Iraqi patrol boats, off-shore vessels, and defender boats. Half of the funds are committed immediately.

Meanwhile, the US Army Corps of Engineers is partnering with Iraq by managing a $53 million pier and seawall project. This set of projects in southern Iraq will provide the Iraqi Navy with new port facilities as it continues to expand its military naval capabilities – but in the end, it all comes down to boats on the water, manned by well trained crews. The Swiftships are currently the medium tier of those capabilities.

The original Swiftships Interceptor design was a 40+ knot high-speed, waterjet-powered 35 meter patrol boat for a Central American county, but it’s still awaiting funding. The “gray hull” picture here is a slower version that was produced for another country Swiftships declined to name, and the green Fort Jefferson that headlines this article is a propeller-driven derivative of that variant.

The Iraqis specified that they wanted propellers, so their Swift Interceptor patrol boats are closer to the Fort Jefferson than to the “haze grey” picture. Other differences from the photographs here will include moving the upper bridge forward; armoring on the lower bridge, upper bridge, and bridge wings; and armaments. Armament will includes the 30mm MSI deck gun system forward, a .50 cal machine gun aft on the 01 level, and 7.62 machine guns on the bridge wings. Northrop Grumman’s Sperry Marine provides the integrated Bridge, CIC, and Radio Room equipment.

MSI’s 30mm RWS system will be very consequential. As South Korea has proven several times, a patrol boat equipped with a main gun that integrates advanced sensors, ballistic computing, and RWS control will severely punish or sink enemy vessels that depend on hand-aimed guns of similar or greater calibers.

This triple-screw diesel-powered patrol boat can be refueled at sea using side by side procedures, and runs on #2 diesel fuel. The hull and superstructure are constructed of aluminum alloy, all welded, in accordance with approved codes. The hull includes 7 watertight bulkheads forming 8 watertight compartments. The superstructure has an enclosed upper bridge with open bridge wings for armament and navigation capability, with an enclosed pilothouse forward.

The boat can comfortably undertake at-sea missions for up to 6 days, with an expected operational time of about 1,500 hours of operation per year. Weather survivability includes Sea State 5 survival at the best heading, and full operational capability at Sea State 3, including 20 knot patrol speed and 10 knot sustained loitering speed for 12 hours. In calm water the boat is reasonably fast, 30 knots (about 34.5 mph/ 55.5 kmh) maximum speed at full load.

Swiftships has built similar boats for other national security customers. The comparable Fort Jefferson was built for the US National Park Service as a top end crew boat with both visitor berthing and cargo capacity, to operate out of Key West FL. It supports the Park on the Dry Tortugas. Shortly after Fort Jefferson’s delivery, however, the USCG encountered serious problems with its newly recondition and stretched Island Class Coast Guard Patrol Boats. Those ships would end up being scrapped, and to cover the gap, the USCG borrowed the Fort Jefferson and used her as a US Coast Guard patrol boat for some time.

Egypt operates a smaller coastal patrol type, the Swift Protectors. Swiftships describes these 6 boats as “the baby sisters of the 35 meter design,” as they were designed later than their larger brethren. Those 25 meter Egyptian craft use waterjets that push them to 40 knots, and have a crew of 12 rather than 25. 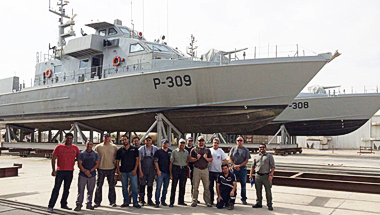 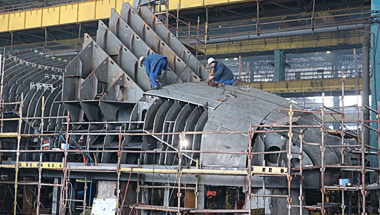 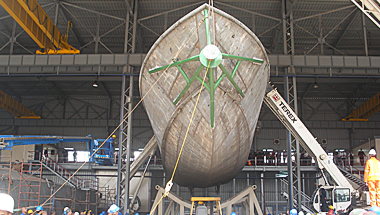