LCU 1700 Update (10 August 2022). Swiftships President, Jeff LeLeux said: “LCU 1700 craft construction is on schedule, and we expect the prototype to be completed within 3 months. There are currently 10 LCUs under construction”.

Earlier on 1st August, 2022, NAVSEA reported to Naval News that 32 LCUs 1700 are on-order, but the total requirement will be more and several inquiries exist from foreign navies.

LCU 1700 is part of PMS 317 – the program office within NAVSEA’s overarching Program Executive Office Ships (PEO Ships), that is in charge to manage the design and construction of destroyers, amphibious ships, special mission and support ships, as well as a broad spectrum of boats and craft for U.S. agencies and foreign military sales. The USN strategy is shifting its strategy to buying smaller and cheaper ships to operate, rather than continuing with its existing fleets of mainly large amphibious ships.

These improved LCU 1700 features advanced propulsion systems, smaller but more powerful engines to reduce fuel cost. It has larger cargo capacity transporting significantly larger loads of equipment and supplies. Key benefits of these advancements include lower cost maintenance and less crew required to operate. The Landing Craft are effective and adaptable for planned and emergency/unplanned missions. They are particularly useful in support of intra-theater transport, foreign humanitarian aid, disaster relief operations and are versatile for amphibious missions.
With further upgraded and modernized systems and capabilities, the LCU 1700 has a Roll On/Roll Off configuration with hydraulically controlled bow and stern ramps, that allow multiple vessels to mate-up to establish a causeway/bridge, to access extremely shallow unimproved landing areas. The crafts are carried aboard amphibious assault ships to the target area and used across the range of military operations to deliver vehicles, personnel and cargo from sea-to-shore and from shore-to-sea.
The vessel is made from rugged steel, with a design life of 30 years. It can reach a maximum speed of 11 knots (20 km/h) with a maximum cruising range of 1200 nautical miles at 8 knots and a crew of 13. LCU 1700 is a heavy-lift platform that is highly reliable and fuel-efficient. It is designed to transport up to two M1A1 Main Battle Tanks or 350 combat troops.

LCU 1700 platform can also be modified to unmanned/minimally manned vessels if autonomous systems are integrated. 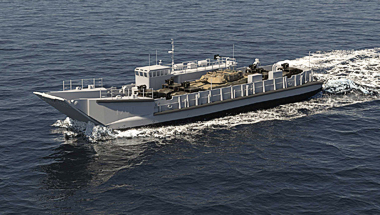 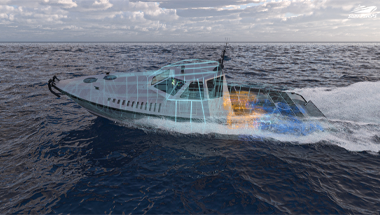 Discover our technological advancements and innovation